Sogball is the name both of a competitive team game (spelled with a lower case 's') and of the object with which that game is played (with a capital 'S'). The Sogball is a three metre-diameter inflatable ball which was the focal point of the annual sogball match, held during the camp of an IVCF. More recently, and quite topically, given the demise of this AICSA tradition in the early years of the 21st century, the Sogball has been described as a three metre-diameter insurance liability. 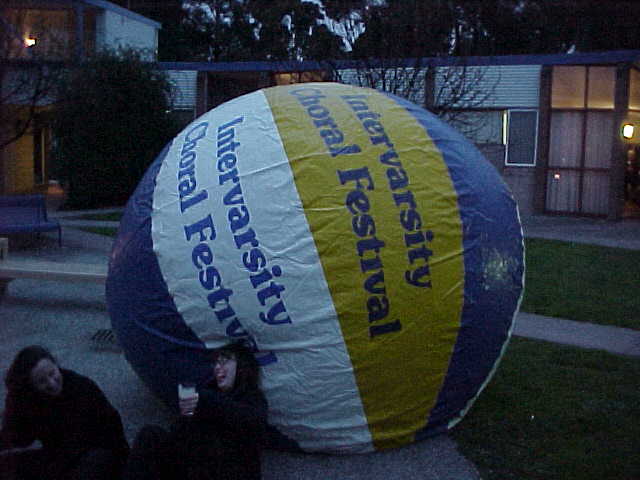 In 1894, a certain M.G. Crane of Newton, Massachusetts, devised a game which he called 'pushball'. The game required two teams of eleven men on a field 140 yards (128 metres) long, and an inflated leather-covered ball measuring 72 inches (183 cm) in diameter. The goal consisted of two upright posts with a crossbar seven feet (2.13 metres) above the ground. A ball forced through the goals under the bar scored five points, while one over the bar scored eight. The game was played in a small number of places, most notably at Harvard University, but never caught on as a national sport. Today, there are no recognised rules for pushball, but the name is applied to any game using a very large ball in which opposing teams – on foot or horseback – try to advance the ball to their respective goals by continuous pushing, throwing or batting, with no formal rules and few restrictions on the players.

In the early days of IV, it became customary to hold a festival football match at some stage during camp. This was inevitably a rather ad hoc affair, involving an arbitrary number of indistinguishable players, many unsure which side they were playing for, and often encompassing several codes of football simultaneously (rugby, soccer and Australian Rules being the most common). The importance of such traditions is shown by the Convenor’s Progress Report for the 23rd IV in Brisbane in 1972, when Andrew Penman reported that the very first motion passed by the committee was that 'It was unanimously decided by the committee that: (a) XXXX [an inferior brand of Queensland beer] shall be used for the boat races; and (b) Football will be Rugby Union'.

The intervarsity Sogball made its debut in May 1971 at Frensham School near Mittagong, the Canberra IV campsite, and was an instant success. The game was conceived specifically as a more picturesque alternative to the football match. The first Sogball was designed and constructed – by laborious hand-sewing – by Robert Kay (then of SUMS) and the celebrated Richard Hartley (SCUNA), and a hat was passed around at SUMS rehearsals to pay for it. For a form that would be both economical in materials and straightforward in construction, the isosahedron was chosen, having twenty identical faces, each an equilateral triangle. The basic idea was to make an outer skin of heavy vinyl, inside which would be inflated a latex meteorological balloon as a bladder. For the official IV Sogball Mark I, Andrew Kay was able to supply a suitable balloon, although history does not relate from whom he procured it. Unfortunately, experience has shown that the life expectancy of such a ball is only a few minutes, given the usual gentle attentions given it by several hundred excited choristers. Attempts to use the sogball without a bladder have been somewhat disappointing, despite the sealing of all seams, because the vinyl itself is slightly porous, and thus allows the previously contained aeriferous matter to escape. Alternative fillings seem also to be out of the question, for the volume of your average nine-foot (2.75 metre) diameter sogball is such that it would weigh approximately eight-and-a-half tons (8.7 tonnes) if filled with water, and over one ton if the water were to be substituted by cork or even foam plastic.

During the 1971 meeting of the AIVCC, significant committee time was occupied by the question of the Sogball. SUMS had proposed that the Sogball become the property of intervarsity as a whole, but it was quickly pointed out that as it required constant attention – which IV itself 'could not provide on a full-time basis' – it would be better if it were left to SUMS to maintain it. Any repairs that were required from time to time would be covered by an impromptu collection during IV. The meeting then passed the following resolution:

'That the Sogball remain in the custody of SUMS to be loved and cherished between I.V.s, whereto SUMS is expected to bring aforementioned Sogball. (Carried with nurgling.)'

The original brown and orange Sogball made appearances in varying circumstances at each of the IV festivals from 1971 until 1979, though nowhere more dramatically than during Brisbane IV 1972 when, at the climax of the Puntracontal Prom Concert, it appeared from the balcony of the concert hall. Mention should also be made of the extra spice of danger added to the game in Tasmania during the 1976 IV when at Port Arthur the Sogball was inflated (or perhaps blown up?) with car exhaust! The Sogball’s useful life was limited, however, due to damage and the general leakage of air, and in 1980, for Perth IV, the Sogball Mark II – bigger and better than ever before – made its first appearance. This Sogball was professionally manufactured by Jaylon Industries and is a true sphere, three metres (9'10") in diameter; it was the largest of its kind manufactured in Australia and seven times larger than any made by Jaylon to that date! As the original colours could not be matched, an arbitrary selection of yellow, blue and white was made with several panels being printed with the words 'Intervarsity Choral Festival'.

Among the more interesting outings for the new Sogball was its sojourn into the shipping channel off the south coast of New South Wales during the 1988 Sydney IV. Blown out to sea by a sudden stiffening of the breeze, the Sogball’s very form rendered it impossible to grasp. With all present resigned to the fact that what was Australia’s loss would soon be New Zealand’s gain, Kendall Crocker and Peter Ascot bravely commandeered a passing fishing vessel and went after the wayward sphere. Upon reaching it, however, the only means of capture was to harpoon it, and it bears a scar to this day. To add insult to indignity, on their return, the valiant pair found that the assembled throng had become bored and gone home. Two years later, another premiere was recorded for the Sogball when not only was it taken to the pub beer garden for a leisurely drink, but it had such a good time that night had fallen before it, and its merry band of followers, decided that it was time to call it a night. And thus, on the way back to camp, the first game of night sogball was played, on an oval that required the players to keep contributing twenty-cent pieces in order to feed the timer for the lights. 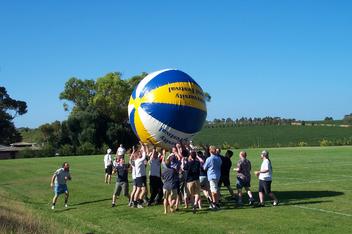 If, as has been suggested, playing sogball is the 'stupidest occupation possible, involving the greatest number of participants', then recent manifestations of the game have been admirable. The nature of the Sogball itself – its size, weight, resilience, etc. – clearly indicates pushing as the means of propulsion. But what about team size? The problem is that because a friendly game of sogball is such a tactile sport, everybody wishes to join in, leading, inevitably, to a melee where the players are shoved, kicked and trampled, while the ball itself remains motionless. Yet, if the aim of the game is truly an attempt to control the movements of the ball toward, and eventually between, the respective goalposts (as is the object of most ball-oriented team sports known to this author), then a far smaller team size seems to be called for. Recent sogball contests have pitted 'talls' against 'smalls'– without any apparent loss of equality due to the strategic choice of a suitable cut-off in height resulting in a greater number of smalls to balance the usual weight advantage of the talls – or 'state of origin' grudge matches, often between those age-old foes, Victoria and New South Wales, but also on occasion featuring such match-ups as 'East versus West' (including South Australia), 'Narrow versus Wide Gauge' (as in railways) or even 'Tasmania versus the Rest of the World'. Smaller teams, coupled with limited playing times (such as playing four ten-minute quarters), made sogball an exciting spectator sport, while at the same time maintaining a high level of participation.

Before the match two more-or-less well matched teams are formed from those who wish to play, usually ending up with teams of about 10 to 15 people. Once on the field, rules are simple enough - each team vies to push the ball between the opponents' goal posts. This 'simple' act is made somewhat more interesting by the fact that the goal posts are people, who may be bribed to move or picked up and carried (they may not move of their own volition) in order to adjust the size of the goals, and thus the relative difficulty of passing the Sogball between them. (It is not that unusual for a score to be made not so much by the ball moving, as by one of the goal posts being picked up and carried past the Sogball itself.)

These complex (in other words, minimal) rules of sogball are in a continuous state of evolution. Rules ensuring that there is a chance of playing against people of similar build have been introduced, and the 'bust versus balls' contest has ceased. One general rule, that 'there shall be no grabbing of the ball', has been observed in the breach, and other rules have been introduced on a short-term basis to suit local conditions and sets of players.

Demise of an Australian Tradition

The 2004 IV saw a particularly injury-ridden sogball match, and an insurance claim was brought against the festival. While the concern for the elimination of personal injury is to be applauded, the unfortunate outcome was a heightened level of fear of litigation, leading quickly to the demise of AICSA's long sogball tradition. The 2005 Festival saw a half-hearted (and half-deflated) 'underground' sogball match with no official sanction or standing; AICSA's favourite giant beach ball has not been seen since.